This is just a “me too”, but it’s a heartfelt one.

Charlie Brooker in Monday’s Guardian: “Every day we humans gleefully churn out yet more books and films and TV shows and videogames and websites and magazine articles and blog posts and emails and text messages, all of it hanging around, competing for attention. Without leaving my seat I can access virtually any piece of music ever recorded, download any film ever made, order any book ever written. And the end result is that I hardly experience any of it.”

Mariella Frostrup in last weekend’s Observer: “I’m the sort of lunatic who considers the phone ringing an invasion of personal privacy, who can’t muster the energy to respond to emails that run at more than a paragraph. At night I lie awake wracked with guilt about unanswered texts and messages but during daylight hours can’t drum up the willpower to clear either my conscience or my in-tray.”

This is pointless really, but I enjoyed doing it, so I suppose somebody might enjoy looking at it:

Both articles interested me a lot because I have hoarding tendencies myself, but what struck me most was the extent to which both articles were shaped by the journalists’ desire to tell a story.

Refreshing contrast is provided by the new Science Behind the News Stories site.

Now I have set things up so that posting to this blog generates a tweet automatically. And, whenever I twitter, my Facebook status updates. Is this a good idea? Or will it just result in a lot of things getting mixed up that ought to have been kept separate?

I’m not sure what I think about all this web 2.0 stuff. It makes life harder in some ways. It is certainly harder to say “Sorry, I was too busy” when the fact that you have just spent several hours having unproductive fun is a matter of public record.

And how do prolific twitterers manage when travelling? How can I say “I’m in Venice” without saying “My house is unoccupied and ripe for burglary”—especially when my professional site, which is linked from my personal one, tells the world that I have access to an impressive array of computing and photographic equipment?

Perhaps my tweets need to be a bit more elliptical. 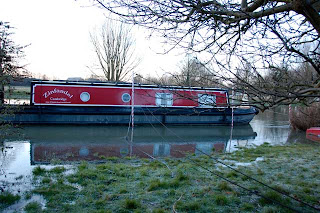 I finally got round to posting my 2007 FOSDEM photos (actually Andrew took some of them). And I’ve put up some from this year, too, and a few drawings I did last year.

The whole lot are on flickr now. If anyone who is in them doesn’t want to be seen, please let me know ASAP.

If there is a photo of you that you like, do ask me for a higher-resolution version of it.

PS (11 Feb): I have now finished this job, so look again now if you want to see the ones that were missing before.

Just discovered www.wordle.net. Such fun!
I made this one using my own Delicious tags, which I suppose tells you something about what I’m interested in:

Yesterday the sun shone, so a perambulation was called for. Out the front door; pause on the pavement to toss a coin. Down the river on the Chesterton side. Boats, reflections, beautiful effects of low winter sunlight. So far, so routine (which isn’t a complaint – I never forget how lucky we are to live here).

On the way home Andrew proposed a variation: up the footpath and then home along Fen Road, past all the mobile-home parks and the Roma houses that lie between the railway line and the A14. A small step out of familiar territory into a totally alien world.

There were dogs. Two slim, tentative, curious ones came out and gave us a friendly sniff. Two huge shaggy Alsatians gave me a fright by barking, but those were chained up in a driveway.

There is money on the Fen. There are shiny 4x4s with personalised number-plates, and some of the houses are really grand, with imposing gateways and trim little stable-blocks for the trotting horses (trotting races are very popular with the Roma).

There’s poverty as well, of course: some of the mobile homes aren’t big at all, and some of the plots are very packed-together. But it all looks tidy enough, at least as far as you can see from the road.

There’s industry there, too. Beyond Silverman’s (known to anyone who’s had to economise when furnishing an office) there are lots of little industrial units. Motor repairs; upholstery repairs; landscaping. Practical stuff. Services, mainly, rather than goods.

And the settlement is expanding still. Builders were at work as we walked past.

Most Chesterton people never venture over the railway line except to follow the river. Would I, without Andrew? Probably not.