The morning fanfare is the first thing that comes to mind. As I descended the stairs she would swirl around the corner from the sitting-room in a flurry of huge fluffy tail, calling out at the top of her voice, in unmistakeably cheerful tones, a very distinctive greeting: two syllables, rising in both volume and inflection. It sounded a lot like “Hel-LO?!”, and she used it only to mean that (she had different calls for other purposes). I always intended to record it. 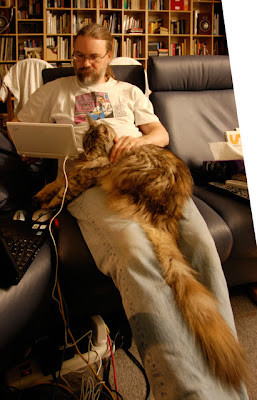 My other special memory is of a typical evening at home, watching the television. We’d hear the cat-flap go, and a few moments later she’d appear. Usually she’d come to me first, step carefully and politely onto my lap, pause as if considering her options, and then proceed to her master’s. Where she would circle around through 360 degrees, always in the same direction, swirl her magnificent tail round after her, and settle herself tidily, and rather smugly, down. Sometimes it would have been necessary to displace his laptop or newspaper in order to achieve this. Once established she would stay for hours so long as she was undisturbed. Sometimes he would reach for a comb and groom her fur, which she submitted to with a reasonably good grace (occasionally whinging but never biting or scratching). If he was not around she made do with my lap instead, but it was clear from her demeanour that this was second best.

The name was my idea—I was thinking of one of those cute fluffy monsters from The Muppet Show—and of course I regretted it later. I first heard the word used in its modern sense by Ed Grundy (a streetwise young character) on The Archers just a couple of months after we’d named her. We considered changing it, but it had stuck, so she was stuck with it.

She quite liked other cats. Darcy, who doesn’t, was a disappointment to her as a companion. Muppet’s attempts to start a playful rough-and-tumble were usually misunderstood. The few occasions on which we found them sharing a bed or a sofa were so rare and delightful as to inspire an immediate dash for a camera, so the photographic record is distorted in this respect.

We chronicled some episodes from her life in our Christmas circular letters:

We acquired two new cats. Their names are Darcy and Muppet.
Muppet is Andrew’s cat. She is large and has a tail of great magnificence.
Darcy is Sarah’s cat. She looks like a fragile and elegant little creature, but in fact she is an ardent adventurer who goes out in all weathers. 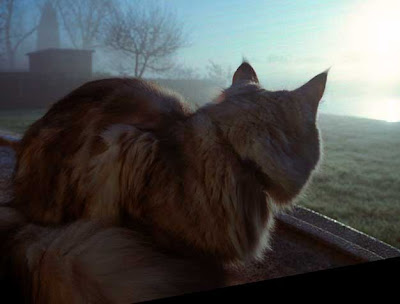 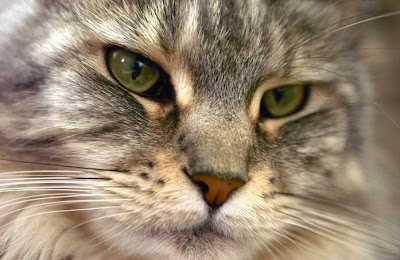 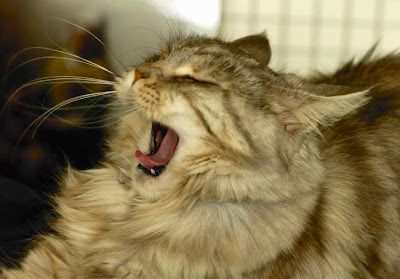 What we did on our holidays

Mostly we sat on the sofa on the boat while it went along. Sometimes we sat up inside the porthole instead. This is particularly rewarding when moored in Ely, where lots of people walk past and they all stop and say “Ah”. (Why do people do that?)

We experimented with walking around the outside of the boat while it was going along, but there was a bit of a mix-up when we were trying to get past each other on the gunwhale and Muppet ended up in the river.

Fortunately she turns out to be a very good swimmer, but the master and mistress made a huge fuss about having to climb out onto the bank to pick her up. We don’t understand why, as it was only a thicket of nettles, thistles and rusty scrap iron. They are weaklings. 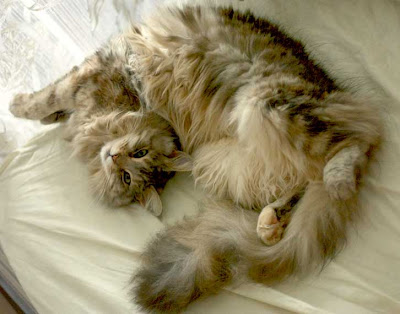 That year, Muppet also appeared on our Christmas card. She was very well insulated from the cold, and quite happy with snow. 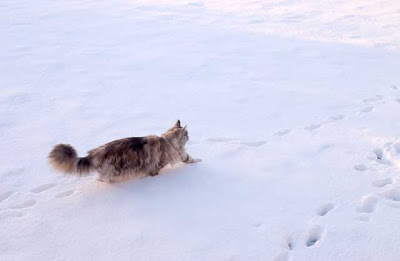 Deep and crisp and even

We continue in joint domination of the Water Street area, or at least this bit of it.
There was a serious challenge over the summer from two very uppity young intruders – one night they even invaded the bedroom that we allow the master and mistress to share with us – but they proved no match for our superior running-away-and-hiding skills and they eventually had to persuade their people to move house so as to save face.
– Muppet and Darcy 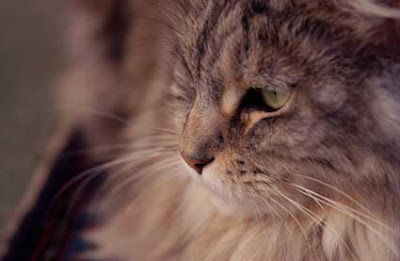 We were very pleased to see the Japanese guy again. Next time we’ll remember to ask for his name and address. He told us the photos of Muppet that he took at our 2004 Open Studio had been very popular at his own exhibition in Tokyo. 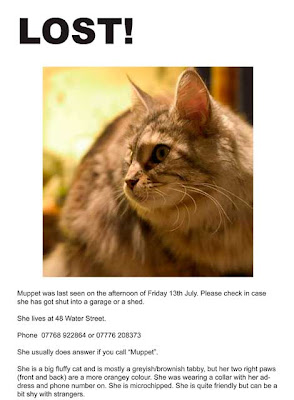 Pussycat, pussycat, where have you been?

Many thanks to the friends who helped with posters etc (we were in Paris). No thanks at all to the man who phoned on the fifth day Muppet was gone, claimed he’d got her and demanded a thousand-pound ransom. Fortunately she came home the next morning. We still don’t know where she was. 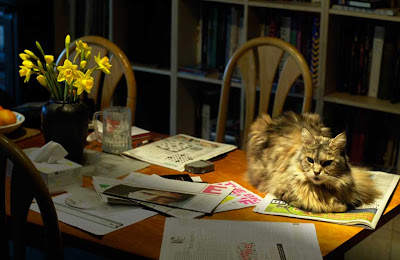 “I must confess I lack my small friend’s dedication to the pursuit of voles. Problem is, I don’t really like raw vole. But they’ve been so plentiful this autumn that no cat could help catching the odd one. So I hand them on to her. Freaks her out! She’s such a suspicious little thing. I have to close both eyes tight and then, would you believe it, roll on my back and wave my paws in the air before she will actually believe that I mean it as a gift.”

We used a little photo story that had already appeared on Flickr.

Muppet was at the vet’s today (well, yesterday, I mean, since it’s now after midnight) for a very minor procedure—flushing out a blocked tear-duct, under sedation. I picked her up in the afternoon and she seemed just like her usual self all evening, only rather cross because she wanted to go out and we had been instructed to keep her in. Then, at about 11pm, Andrew went to get her (she was sitting in the hall) to give her an eye-drop. As he carried her over to the sofa she seemed to shudder, and then she just collapsed. We rushed her to the emergency vet’s in Milton, but she was dead on arrival.

The emergency vet was very kind and spent time with us talking it over. He explained that she died because she had lost a great deal of blood. He said it was most likely internal bleeding (must have been—there was no visible wound), though he couldn’t explain what had caused that. He said that nothing connected with the usual procedure to flush out a tear-duct could possibly account for this, and it was probably a coincidence that it happened on the same day. He said that a post-mortem would be the only way to find out, and of course there was no need for that to be treated as an emergency. So we brought her body home, and will see about that sort of thing in the morning.

She had a good life. She was nine years old (same age as Mercury was when he died), and she was always active and healthy apart from minor things. It is a shock for us, but perhaps not too bad an end for her. It was sudden—no lingering illness—and she died in the arms of her master, whom she adored.